Find the best scientific jobs and events across Canada

Why are Canada’s scientists getting political?

By First published on Nature Spotlight Canada on nature.com on 24 April by Brian Owens

The enthusiastic reception was as much a show of relief over the change in government as a greeting for the new minister. The general election in October of that year had seen the Conservative government helmed by Stephen Harper since 2006 lose power to Justin Trudeau’s Liberal party.

Harper’s administration had made few friends in the scientific community. It had laid off thousands government researchers and prevented those kept on staff from speaking to the public or press. It had also allowed funding for science to stagnate.

“Funding was a catastrophe, especially for fundamental science. Everything was targeted,” says Nathalie Grandvaux, a biochemist at the University of Montreal. “A lot of people lost their funding.”

Duncan’s appointment added to the mood of optimism that surrounded Trudeau’s election victory. Duncan is a scientist — before going into politics, she studied medical geography and how the 1918 Spanish flu had spread. “I come from your world,” she told the crowd. “My life has been about the intersection of science and policy, and evidence-based policy matters deeply to me.”

“There was a lot of excitement and hope,” says Katie Gibbs, executive director of the science campaign group Evidence for Democracy in Ottawa. “Not just because of the change in government, but because it seemed Trudeau and his team had adopted science as a real issue in the campaign.”

The Liberal government moved quickly on many of its science-based election promises. On 5 November 2015, its first full day in office, it reinstated the mandatory long-form public census, a detailed survey of Canadian citizens that takes place every five years, and that had been scrapped by the Conservatives five years earlier. That month it also announced that government scientists would again be free to speak to the media and public about their work (this was reflected in employment contracts from December 2016).

The government’s first budget, in March 2016, included an extra Can$60 million (US$45 million) per year for the country’s two largest research-funding agencies (see ‘Funding boost’). And Duncan commissioned David Naylor, a former president of the University of Toronto, to write a comprehensive review of the country’s structure for scientific research, the first such review of Canadian science in around 40 years.“My goal was to return science and research to its rightful place, restore evidence-based decision-making, and ensure scientists had the funding, labs and tools necessary to do their research,” says Duncan.

The review, published in April 2017, concluded that Canada had started to fall behind other countries on a variety of measures, such as research output and international prizes. It recommended ways to reverse the trend, starting with a major reinvestment in basic research of almost Can$500 million. It also called for more funding for research infrastructure and the indirect costs of research, and increased support for graduate students through fellowships and scholarships. In all, the report suggested increasing annual science spending by Can$1.3 billion, as well creating bodies to improve the coordination and evaluation of research.

The research community embraced the report’s recommendations. “It called for what a lot of us had felt,” says Gibbs, “that there really did need to be an investment, particularly in fundamental academic research.”

The report also gave the research community something to rally around and a concrete set of objectives against which it could measure the government’s performance. A grass-roots campaign to lobby the government to take up the report’s recommendations coalesced under the hashtag #SupportTheReport. Evidence for Democracy and a student-led group called the Science and Policy Exchange in Montreal helped to organize meetings between politicians and researchers, and organized letter-writing campaigns.

This mobilization was unprecedented, says James Woodgett, director of research at the Lunenfeld–Tanenbaum Research Institute in Toronto. “The research community spoke with one voice, which they hadn’t before.” 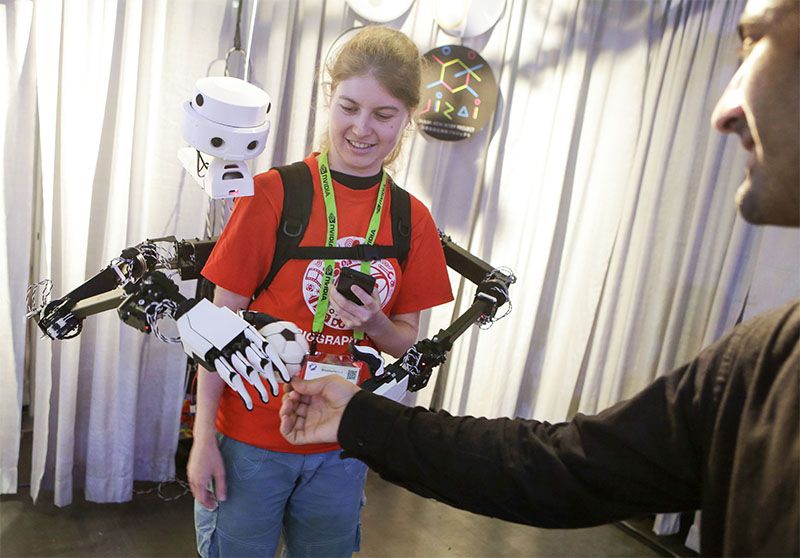 An exhibitor shows off a wearable robot during a conference in Vancouver, Canada, in August 2018.Credit: Liang Sen/Xinhua/eyevine

The pressure paid off. The government’s 2018 budget went a long way towards meeting many of Naylor’s recommendations. The government pledged almost Can$4 billion in new money for science over five years, including big increases to the bottom line for the three main funding agencies: the Natural Sciences and Engineering Research Council, the Social Sciences and Humanities Research Council, and the Canadian Institutes of Health Research. A Can$275-million fund was created to support interdisciplinary research. There was also Can$763 million for the Canada Foundation for Innovation, which funds research infrastructure, and, more importantly, that funding was made permanent; previously, the agency received ad-hoc cash injections. The Canada Research Chairs programme, which supports scientists’ salaries at universities across the country, received Can$210 million, which was reserved for early-career researchers.

“The response in the budget was encouraging, with substantial new, untied money going into the granting councils,” says Naylor. “It was a boost to scientific enquiry that had been diminished under the previous government.”

There were still limitations. The funding boost did not match Naylor’s Can$1.3-billion target, which many researchers did not see as overly ambitious, and there was no more money to support the indirect costs of research. And although the budget lauded support for students and early-career researchers, there was no direct funding for them through scholarships and fellowships.

This was an issue, says Tina Gruosso, co-president of the Science and Policy Exchange. “Students say they see much more benefit from direct support compared with support via their supervisor’s grant,” she explains. Gruosso says that this is especially true for women and under-represented groups.

The 2019 budget, announced on 19 March and the last before federal elections in October, contained small spending bumps for genomics and physics, but did not raise the high bar set by the 2018 windfall. Maxime Gingras, a research officer at the Professional Institute of the Public Service of Canada (PIPSC), a trade union representing more than 16,000 federal scientists, said of the budget: “as our communities grapple with the impact of climate change, the importance of public scientific capacity cannot be overstated. And yet, with a couple of small exceptions, basic research and government regulatory science are mostly absent from budget 2019.”

The budget report devoted just 6 of its 460 pages to building research excellence. It promised an additional Can$18 million over three years to the Stem Cell Network, a non-profit organization in Ottawa that aims to translate research into clinical applications and commercial products. Can$40 million was allocated to Brain Canada Foundation’s research fund, over two years, and Can$100 million over five years to Genome Canada, to fund “new large-scale research competitions and projects”. Two cancer charities received a combined Can$160 million. And TRIUMF, Canada’s particle-accelerator centre in Vancouver, is set to get Can$196 million, which, along with an extra Can$97 million of National Research Council funding, equates to Can$293 million over five years.

The budget also promised the establishment of a Strategic Science Fund starting in 2022–23. The advisory body would subject future government funding decisions for research to greater scientific scrutiny. Finally, the budget allocates Can$114 million over five years to an additional 500 master’s scholarships and 167 doctoral scholarships a year.

Although stores of goodwill had been built up in the early days of the Liberal government, they have been tested since. After the 2019 budget was announced, Woodgett told Nature that the government’s selective approach to funding, which is not peer reviewed, and, critics say, could reward larger ‘prestige’ programmes such as artificial-intelligence infrastructure (see ‘AI advantages’), abandons the Fundamental Science Review plan, adding: “Science thrives with open grant competition. It is asphyxiated by picking winners.”

And, although government scientists are officially unmuzzled, a survey carried out in summer 2017 by the PIPSC found that one in five respondents had been prevented from answering a question from the media or public since Trudeau took office, and 53% said that they still do not feel they can speak freely to the media about their work.

The government has also been slow to act on Naylor’s suggestion to create an advisory council to guide where new investments will go. A call for applications to join that new body, the Council on Science and Innovation, only went out in January 2019, and it is not clear when the council will be in place. The slow pace is puzzling to some observers. “To me, when you know you are going to have a number of years when you are going to be making big investments, that’s really when you want to put together your advisory body,” says Gibbs. “So it’s a bit surprising that the oversight body is coming almost as the last step.”

And the appointment of a chief science adviser — promised in Duncan’s 2015 speech — dragged on for nearly two years before Mona Nemer, a molecular biologist at the University of Ottawa, was installed in the post in late 2017.

Just two years after her first rapturous reception, Duncan’s speech at the 2017 policy conference was punctuated with awkward pauses, when what were intended to be applause lines were met with polite silence — in some cases, the minister needed to prompt her audience to clap. The days of the Liberal government getting a free ride just because of what it was — or what it wasn’t — seemed to be over.

Duncan insists that the government remains committed to supporting science, and to rebuilding the financial support that was eroded over the previous decade. She says her personal focus is on improving support for young researchers and for equality, diversity and inclusion — she highlights the fact that she is currently working to bring the Athena SWAN Charter (a UK initiative to support good employment practices in higher education) to Canada to support women and other under-represented groups in science, and supporting efforts to involve more Indigenous communities in research. And last summer, Nemer unveiled a new, model scientific integrity policy. But it will take time for all of these efforts to bear fruit. “These are big, systemic changes that we are making,” says Duncan. “That’s not easy, but it is important and it is necessary.”

Despite the somewhat uneven progress, researchers are clear that there has been a major improvement in relations over the past four years. “It’s fair to say that, on many files, there’s no question we’re better off than we were five years ago,” says Gibbs. “But going forward we need to make it clear that the science box hasn’t been fully checked. There’s still more to do.”

With a federal election coming in October, the united front that the scientific community has presented over the past five years has fractured somewhat, says Naylor, as some groups and institutions spot an opportunity to lobby for pre-election handouts. But he expects the spirit of collaboration to reassert itself soon. “The community has realized the power of solidarity and common cause,” he says.

With this political awakening, no science minister, no matter how sympathetic to that cause, can expect an uncritical reception from now on.

If you have a career story that you'd like to share, then please complete this form, or send your outline by email.